Posted by Brad on September 21, 2013 in TechMuse Blog, The Museum Learning Experience | 0 comments 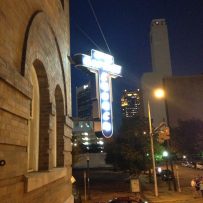 Something new happened at the American Association for State and Local History conference this year — AASLH booked the conference in partnership with the International Coalition of Sites of Conscience, an organization focusing on “memory to action.” It feels like something is changing in the local history field — the feeling in the air is more grassroots, and more action-oriented.

Another key component: the conference is in Birmingham, held within days of the 50th anniversary of the horrific bombing that killed four young girls at the 16th Street Baptist Church and changed national consciousness toward Civil Rights legislation. In one of the most moving conference events I’ve attended, Carolyn McKinstry, who was in the church at the time of the bombing, gave a speech on healing and reconciliation — while we sat and listened to her in the very church itself.  (I can’t imagine a more powerful combination of message and place).

Across the street, the Birmingham Civil Rights Institute hosted the evening reception, exhibits retelling the struggle of the Civil Rights Movement.  Artifacts and news footage throughout were jaw-dropping…the firebombed bus…the tank that rolled through Birmingham. At the end, visitors could record their impressions and experiences (which I was privileged to have developed 4 1/2 years ago for the exhibit).

I could go on — from my post in the exhibit hall, I noted that a number of sessions at the conference focused on difficult issues needing change and action, notably immigration. Big picture: museums all around are re-inventing themselves to be more relevant and have an impact on their communities: children’s museums with “re-imagining“, science museums by advocating on issues such as local environmental concerns. And looks like local history museums are stepping up to the plate.