Posted by Brad on February 25, 2014 in TechMuse Blog, Technology and Museums | 0 comments 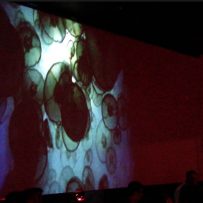 Last summer Amy Walsh and I tried an experiment in Providence, booking our “Museum Puppet Throwdown” at the popular restaurant/bar and nonprofit arts center AS220. We had a fun thinking about some museum-like popups in non-traditional venues. The idea: “Let’s go where people like to have fun.”  (The more serious idea: let’s look for ways of bridging museum exhibit themes out to community venues).

The idea was born about 6 months before that when I visited my Shintaido friend Bruno Bernier on the 5th anniversary of his popular restaurant and event venue Le Cercle in Quebec. Hundreds of people having a great time, dancing, talking, drinking, eating…One thing that especially caught my attention was the giant video wall, with video art projected live by VJ’s in sync with the music. And in one section of the video, a swarm of jellyfish floating by.  The VJ cleverly played the video back and forth in sync with the beat — beautiful, mesmerizing and very amusing. (I refer to this revelation as “scrubbing the jellyfish”).

It struck me that it wouldn’t take much to make this an aquarium event — an evening dancing with sea creatures, a little popup exhibit in a corner, a “call to action” to record commitments to improving local sea habitats, a mechanism to follow up. And, suddenly we’re talking about a new concept, “the distributed museum” (which has come up in Re-imagining Museums), in which the museum pops up in places throughout the community.

I think it’s happening. This week I’ll be tweeting/posting examples of museum popups and programs at popular community venues like pubs and restaurants.  You can follow of facebook, twitter, or linked in.  Any examples come to mind? 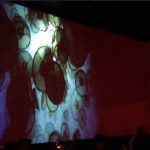 Scrubbing the Jellyfish at Le Cercle 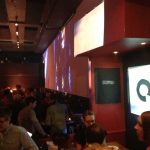 …could be a popup exhibit 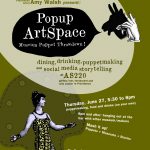 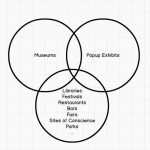