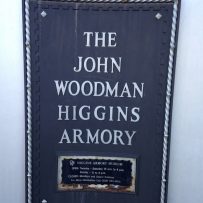 One of the less happy missions I’ve been on with Storykiosk: to help visitors at the Higgins Armory Museum, a beloved cultural institution in Worcester MA since 1931, say goodbye to the museum before it closed forever on December 31.

I worked with Director of Education Devon Kurtz, who had the challenging mission of developing the final exhibit for the museum.  We came up with three questions to ask visitors:

Visitors rose to the challenge.  We recorded hundreds of videos in the final two months before closing. Several things struck me as I listened to the stories: there were key objects and experiences that re-appeared throughout the videos — the dog wearing armor, the giant chess game, making a shield, and the experience of the Great Hall itself are a few of the highlights.

I was also struck by how articulate most of the 7-10 year old boys were talking about the museum’s collections: knights, armor, and swords. And, finally, what an intergenerational experience the museum provided. There were several older visitors who talked about their memories visiting the museum as a child, and their desire to share the experience with their own children and grandchildren.

Great that the collection is going to the Worcester Art Museum, though of course a museum is much more than its collections — including the staff, programs, and the building itself. A difficult situation all around, but one that concluded with the integrity of the collections and heartfelt appreciation from the community.