Home » TechMuse Blog » From the Archives: Ghosts of a Chance, milestone museum game

From the Archives: Ghosts of a Chance, milestone museum game

Posted by Brad on February 7, 2013 in TechMuse Blog, Technology and Museums, The Museum Learning Experience | 0 comments 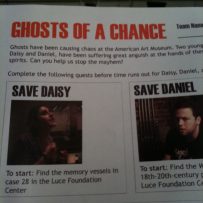 So, here’s a blog entry that I meant to publish two and a half years ago, and somehow never remembered to hit the “publish” button. Oops. But now that time has passed, and museum-based games are on the rise with museum events, and the “Ghosts of a Chance” alternate reality game at the Luce Foundation Center at the Smithsonian American Art Museum  is seen as a milestone in the field, thought I’d go ahead and hit the publish button…

June, 2010.  Today I played a bit of the “Ghosts of a Chance” alternate reality game at the Luce Foundation Center in the Smithsonian American Art Museum. It’s a combination of text messaging, video clues, and a scavenger hunt in exhibits, all driven by a storyline motivating the game: two of the curators are held captive by haunted objects in the collection. I think. (I showed up late).

I had a preview of the game at AAM during Georgina Goodlander’s presentation and was blown away. Totally wild, totally new, something I hadn’t seen before (though it’s been up and running on occasion for a couple years now).  Start it off with a text message to one of the “curators”, which leads to a video, which leads to a clue in the atrium windows, which leads to an object in collections, which leads to…ultimately a little sculpture I made out of tinfoil and presented to staff (somewhat sheepishly since my sculpture inadvertently turned out to be embarrassingly phallic).

There we go. I wish I hadn’t been late, because I missed the rest of the group, and it definitely is an activity that encourages group interaction. Very interesting. 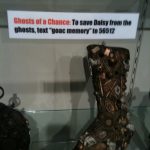 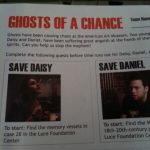 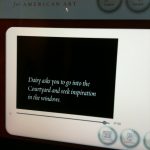